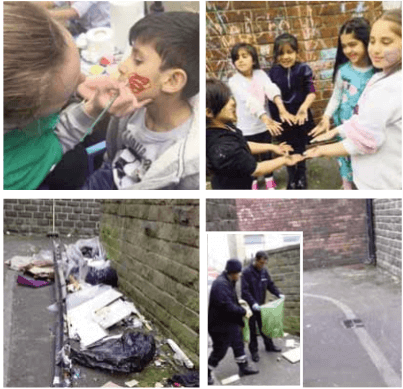 The residents of Marshfield once again held a community clean-up with support from Community Councillor Imran Younas. Cllr Younas worked tirelessly to ensure the right partners and local people were recruited.

Bradford Council and Better Place worked with him and the residents to have a day of action that brought the community together. This was done in March in response to concerns that were raised by residents about the general cleanliness of the area, fly-tipping and grot spots that needed attention.

The day was a great success, around 30 people turned up including parents, children, and community activists. Local people cooked food which was shared and resources were contributed by Bradford Council. Better Place had a face painter on hand during the day and organised other activities to help with the engagement of children. Cllr Imran Younas says; “being involved in ensuring our areas are litter-free is so important, as having a clean area with some greenery is just uplifting. It creates an environment that positively impacts people’s perceptions of the area. During the age of diminishing public services, it is ever more important for us as residents to act and be involved in taking ownership of our issues!”